More than 50 species of Strobilanthes (Neelakurinji), all endemic to the Western Ghats, have been identified, each with its own life cycle

More than 50 species of Strobilanthes (Neelakurinji), all endemic to the Western Ghats, have been identified, each with its own life cycle

A lazy sun peeps through the mist revealing hills carpeted in blue flowers. It is that time of the year when the shola grasslands of the Western Ghats, stretching from Tamil Nadu and Kerala to Karnataka, Goa and Maharashtra blossom.

Once the monsoon drenches the forests, hills and plateaus of the Ghats, even the barren hills, get a coat of green, with silver waterfalls gushing down in streams and rivulets. Post-monsoon, the he’s talking carpets the Western Ghats with its mauve and deep blue blossoms. Tourists from across India come to celebrate the flower that blooms only during certain years, usually from mid-September to early November, depending on the weather.

Professor E Kunhikrishnan, an expert on the Western Ghats, says more than 50 species of Strobilanthes, all endemic to the Western Ghats, have been identified, each with its own life cycle. “After it blooms, the plant dies and its seeds lie buried in the soil. Strobilanthes kunthiana in Munnar blossoms once in 12 years. There are plants that flower once in eight years, four years and even annually. The flower has a natural lifecycle that it follows year after year, a miracle of Nature,” he says, adding that there are species that produce white flowers and those with a crimson tinge too.

The Kaas plateau, known locally as Kaas pathar, in the Sahyadri range, about 25 kilometers from Satara, Maharashtra, has been designated as a UNESO World Heritage Site since 2012. Shoba Jose George, a travel curator, says, “At an altitude of about 1,200 meters above sea level, the plateau blooms in shades of white, yellow and pink soon after the rains. The seemingly barren plateau is transformed dramatically into a carpet of small wild flowers. It lasts just a few days but is a sight to treasure.” Online booking is mandatory to see this ‘valley of flowers’.

Strobilanthes kunthiana came into flower at Kallipara in Idukki, Kerala this year. Tourists came in droves to see the rare visitor. Ambu Adithyan, an entrepreneur and antique collector, who traveled to Munnar to see the Neelakurunji blooms for the first time, says that unlike the mass flowering seen earlier in Eravikulam, there were patches of mauve that adorned the hills in Kallipara.

Protected by the Forest Department, Kallipara is accessible via two entrances on payment of ₹20. “Once you reach the top of the hill, you can see both Kerala and Tamil Nadu. The Kerala side of the hill was filled with tourists who wanted to see this natural phenomenon. But on the other side of the hill, there were serene paddy fields and greenery,” recalls Ambu. 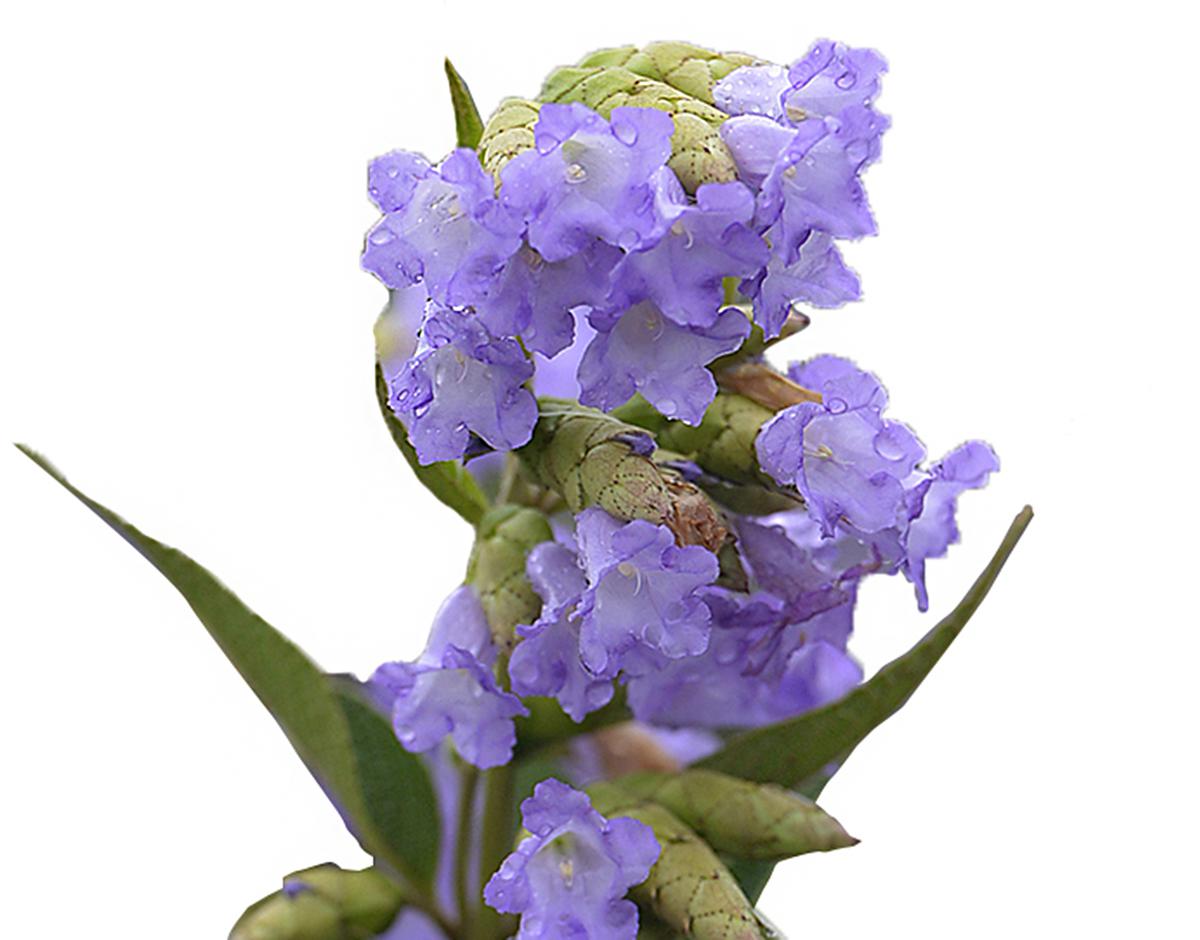 Varieties of Strobilanthes can be seen in parts of Kodaikanal and Ooty too, says Praveen Muraleedharan, a Nature photographer. The flowers, says Praveen, can also be found in private estates and plantations. But many are reluctant to give it any publicity for fear of invasion by tourists who, sometimes, go on the rampage, plucking the flowers and uprooting the plants.

Neelakurinji, endemic to the Western Ghats is a protected species. Kurinjimala Sanctuary covering around 32 hectares, 45 kilometers from Munnar, is the habitat of the plant in the Kottakamboor and Vattavada villages in Devikulam Taluk, in Idukki. 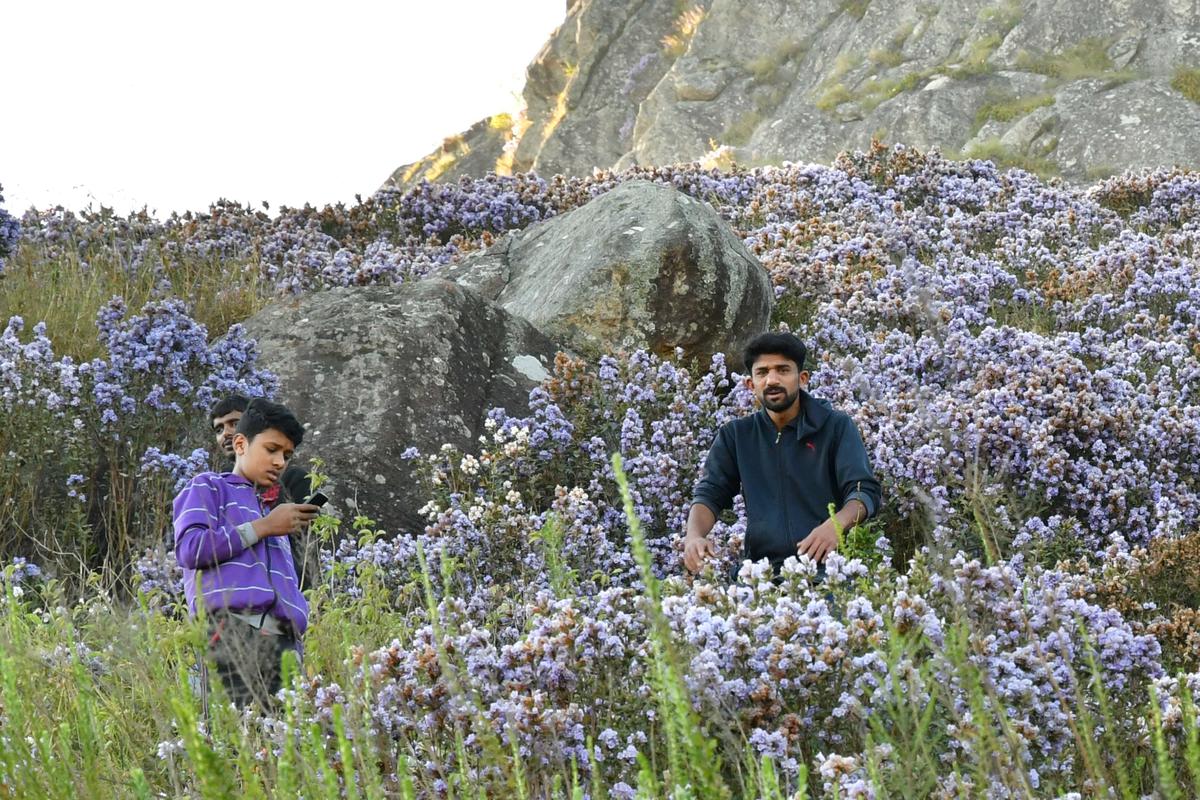 Meanwhile in Goa and places in Karnataka, some species flower after eight years. Miguel Braganza, member of the Goa Botanical Society, says that Karvi ( Strobilanthes callosa) found in Goa and Karnataka, flowers in eight years. The society had organized a trip to see the blooms at Niranakal, Ponda.

He explains, “Karvi blooms in the Sahayadri range of the Maharashtra-Karnataka-Goa border of Amboli, Kalsa Bhandura, Chorla Ghat in Sindhudurg in Maharashtra, and in Belgaum, and Dharwad districts in Karnataka. Recently, it was blooming in Ponda, once a part of the erstwhile Sondekar Raja kingdom, which is now in Goa. 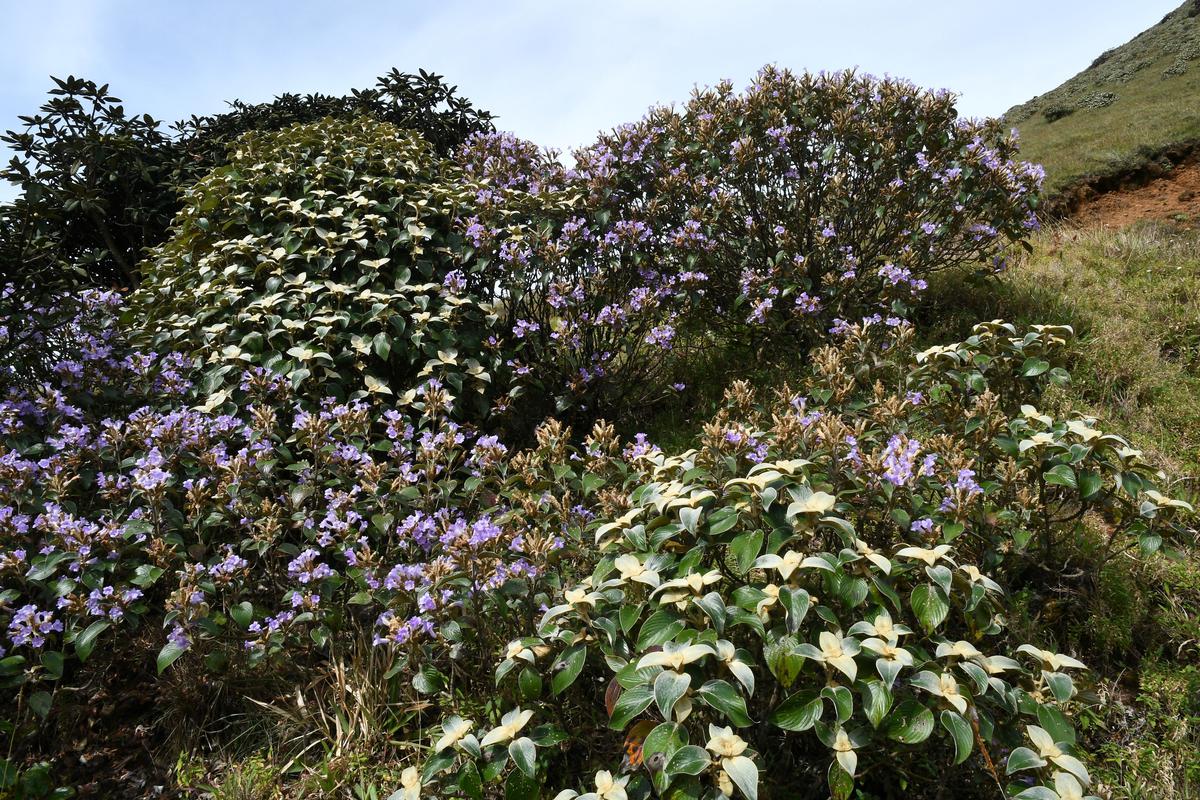 Strobilanthes Lanata, a species of the Neelakurunji in bloom on the Upper Niligiris. | Photo Credit: M. Sathyamoorthy

“Strobilanthes kunthiana.” will flower in Eravikulam in 2030 and Strobilanthes callosa in Chorla Ghat in 2024. We were lucky to have a few plants in bloom at Nirankal in Ponda, together with gregarious flowering at Amboli Ghat, Maharashtra, which should be on until November-end,” adds Miguel. It is not only the dramatic flowering of the Kurinji that transforms parts of the Western Ghats. Miguel adds that several other plants such as Bladderwort and Droscera indica flower during the season on plateaus that seem barren in summer. He laments that many such plateaus are now being considered as ideal sites for situating industrial complexes and adds, “These are fragile eco-systems that ought to be protected.”