There’s an uptick in internet manipulation in India, with people faking profiles and tricking the search algorithm to get IMDb credits and Google knowledge panels. Filmmakers, screenwriters and casting directors speak to the Magazine on whether this is a worrying trend

There’s an uptick in internet manipulation in India, with people faking profiles and tricking the search algorithm to get IMDb credits and Google knowledge panels. Filmmakers, screenwriters and casting directors speak to the Magazine on whether this is a worrying trend

Until last week, 17-year-old Firoz Chaudhary was listed as a singer on the IMDb page for Tom Cruise’s 2022 hit Top Gun: Maverick. His profile described him as an actor, musician and model associated in varied capacities with several big English and Hindi movies, including Fantastic Beasts: The Secrets of Dumbledore (2022) and Jayeshbhai Jordaar (2022). A quick search for the teenager “from a small village in Uttar Pradesh” pulled up a verified profile on the music app Spotify and a Google knowledge panel (the snapshot dashboard that appears alongside search results).

Akash Noatia, an 18-year-old from Tripura, enjoys similar fame. Internet search introduces him as a digital marketer and social media influencer, while the teen’s IMDb profile enumerated his experience as an actor, music ‘supervision’ and title track singer (separately) for movies such as Malang (2020), Shershaah (2021) and Sooryavanshi (2021).

Both Chaudhary and Noatia’s internet footprint sound impressive, except that their artistic pursuits are incorrect and the search highlights artificially manufactured. At the time of writing, IMDb did not respond to our queries, but the platform did delete the filmographies of the three profiles we flagged.

Is fake visibility a real threat?

These are not isolated cases, but part of a wider galaxy of individuals who are gaming the system. This article’s co-writer, Baid, had followed the breadcrumbs when he first stumbled upon the fake profile of a Subhankar Bagchi on IMDb (see box) last month, only to uncover a few dozen more — along with video tutorials on YouTube that explain how you can bag your own Google knowledge panel, among other things. 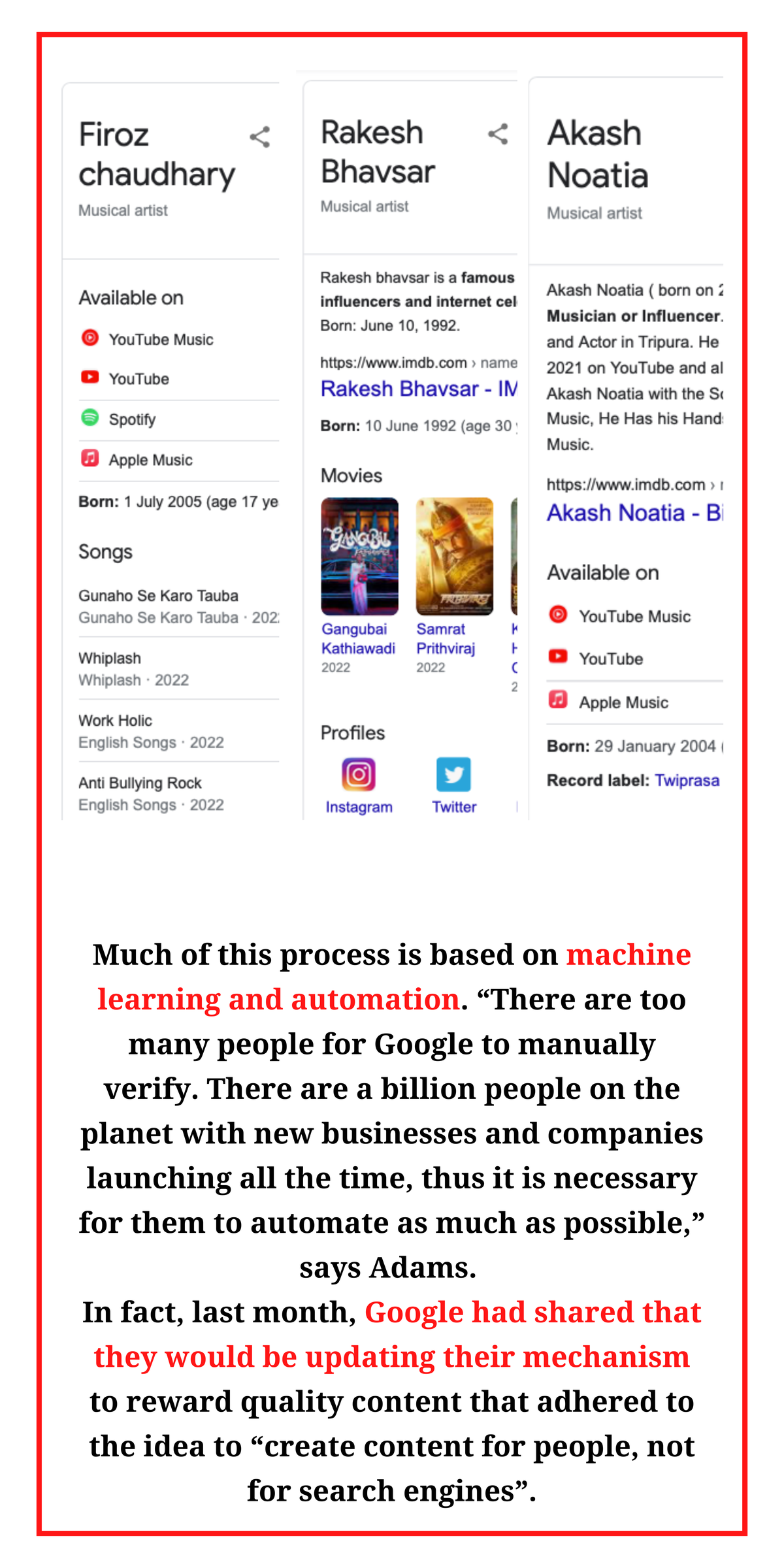 But this trend isn’t new. Hindi film screenwriter Varun Grover had made an observation two years back about an individual claiming to be a writer of the web-series Sacred Games (2018-19), when the actual writer, Pooja Tolani, had to wait for “a long time” and post screenshots of the show to get herself the rightful mention. Grover told the Mumbai Mirror in 2020 that the man later confessed to the wrongdoing and “after interacting with him, I figured… he thinks of himself as some sort of a vigilante, exposing loopholes in a system. Also, the joy of cheap thrills is difficult to resist.”

IMDb, or the Internet Movie Database, is believed to be among the most credible platforms for movie reviews and ratings internationally (recent red flags about review bombing aside). A credit on the platform, other than being an aspirational endeavour, also works as an artist’s resume in the filmmaking industry — especially for writers and technicians. “Films are rated on multiple platforms, but considering IMDB’s global stature, it is the first thing that anyone would seek,” says filmmaker Vishnuvardhan of Shershaah and Arrambam fame. Recently, while recruiting a director of production (DOP) for his upcoming project, assistants gave him the IMDb profiles of two DOP recommendations. But would a fake profile get in the way of genuine talent being hired? “It would not bother the hiring process in any way,” he says. “We have enough time before we finalize new hires, about one to two months, to call and check.”

However, making it to the entertainment industry might not be their only ambition. “Other than maybe scamming social media platforms to get a blue tick or acquiring bragging rights in front of their friends, or getting some influencer [marketing] collaborations, I do not see them getting any serious opportunities,” says Hindi film screenwriter Ankur Pathak. “Even if they are able to get themselves a call [for selection]in a matter of one to two meetings the producer or director would be able to gauge if they have it in them or not.” Cringe pop — a genre of music that is often described as being “so bad that you can’t stop watching/listening to it” — could be another factor. Many of the self-compositions these youngsters post are either electronic remixes, high-octane electronic mashups or have lyrics overwritten on already existing instrumentals/music. And the idea could be to get their music some traction any way they can. 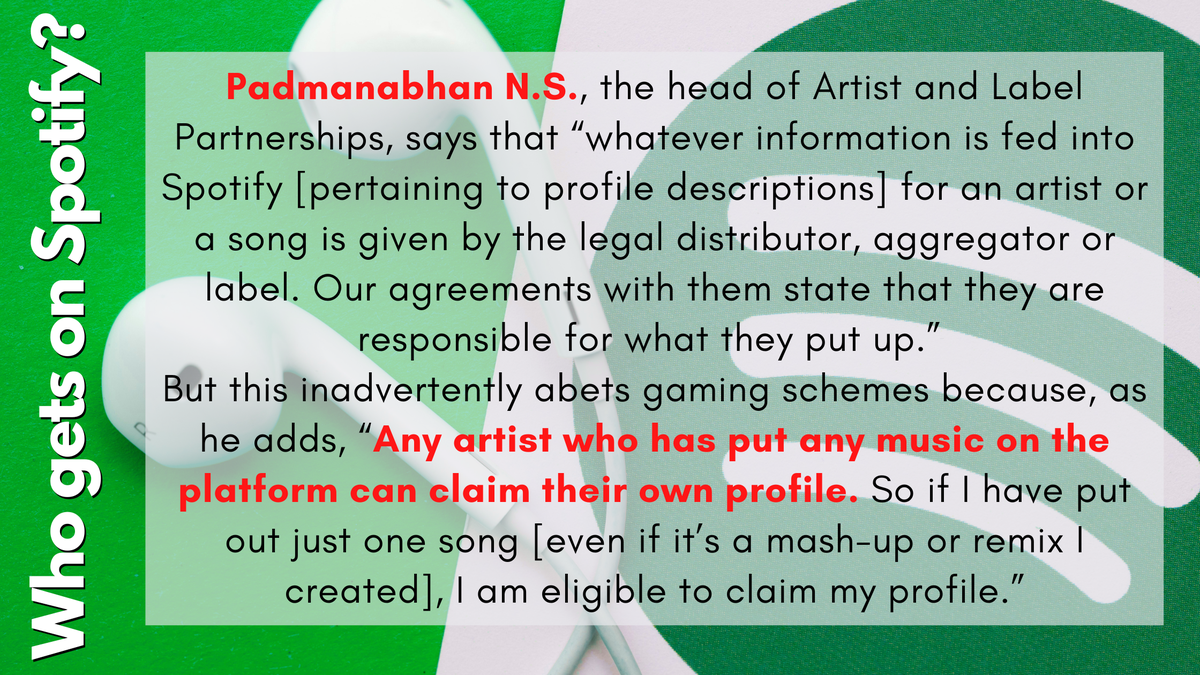 After August’s deep dive and a Twitter thread about the young men from small towns gaming the system to manufacture fake clout caught people’s attention, as many as four different Subhankar Bagchis came forward to argue their case in the comments. One wanted it deleted, another argued about their lack of knowledge on the matter, the third apologized for the scheme, and the last one sought communication to defend himself. (But as there was no way to ascertain who was genuine and how Baid could help them in terms of dealing with their digital footprint, he didn’t pursue the conversation.)

But accountability, we feel, must be on the tech platforms rather than the teenagers. After all, if there is a loophole, there will be someone to exploit it.

Meanwhile, in the entertainment industry, talent will always come out. As Vishnuvardhan says, “Finally, it boils down to one thing: when you meet them, how do you feel?” What vibes do they present? Do they understand the subject that is being dealt with and do they possess the required sensibilities?” As for potential talent to be found online, he says, “Eventually, if they are really going to do good work, they will make it.” ‘Fake profiles may get you a foot in the door, but nothing more’

Abhishek Banerjee, co-founder of Casting Bay and the casting director for Alia Bhatt’s recent film Darlings and shows like Mirzapur and Paatal Lok on why it isn’t easy to fool people in the industry

“We are used to actors lying about their skill, their age. Honestly, this [youngsters gaming the system] doesn’t create a lot of problems for us because it is very easy to identify the ones with a fake profile. At the end of the day, whether you’ve claimed to have acted in blockbusters or trained at The Lee Strasberg Theater & Film Institute, you will have to come for an audition and perform in front of the camera. I think this goes for technicians [or writers and singers] too. Logically, you can’t fake it for long. You could get a foot in the door or that first call, but at the next step, you will have to do the work and that will cull the talent from the rest. So, I don’t see this as a big problem. We are all storytellers. It is very difficult for somebody to tell us a story!

Our main source for profiles is not IMDb. We are well connected with theater groups, besides institutes, walk-ins, word of mouth, etc. Of course, it is easier to check profiles online, but Instagram is a better background check than an IMDb.

In fact, I think the bigger problem is for them [the youngsters]. There are so many people out there impersonating directors, producers, and casting directors. Recently, somebody allegedly took around ₹38,000 from a young man stating it was for a Casting Bay workshop. His father later came to our office, asking why we hadn’t conducted it. We had stopped our workshops two years ago.

There are so many such fake profiles on Instagram who will randomly DM thousands of people and I am pretty sure they have a success rate of 30-40% [of people replying to them]. I remember seeing a Sriram Raghavan profile asking for actresses for his film. And I was like, ‘I’m casting for him. Who is this Sriram?’ These are the things that we face more often and which are more dangerous. Because there are so many youngsters who do not know how to approach the right companies. So they will fall prey to fakes like these.”