Over 20 pelican chicks in nest balanced on a transmission tower at Kattupalli, proving that the polluted Pulicat-Ennore wetlands are still a crucial habitat for birds

Over 20 pelican chicks in nest balanced on a transmission tower at Kattupalli, proving that the polluted Pulicat-Ennore wetlands are still a crucial habitat for birds

A family of pelicans has taken up residence on a transmission tower at Kattupalli in North Chennai, blissfully unaware of the debate they are sparking. Around 25 chicks are up and about now, and will soon fly out to start a new life. The presence of the birds indicates how crucial the Ennore-Pulicat wetlands are for wildlife, adding a fillip to the Save Ennore Creek campaign.

The wetlands are a mosaic of habitats | Photo Credit: M Yuvan

The chicks were discovered by a team of four, naturalists M Yuvan and Rohith Srinivasan, as well as social activists K Saravanan and Nityanand Jayaraman, when they recently visited the wetlands to document birds. “Apart from seven nests of pelicans, we also found a nest of a white-bellied sea eagle,” says Yuvan, adding that the team also spotted a large flock of garganeys (migratory birds that come from Russia), open-billed storks, black-headed ibis, Little Temminck’s stints and greenshanks. The team also saw a painted stork carrying a twig: a sighting that hints at a possibility of the birds nesting there.

The team returned with enough evidence to prove that the wetlands are an important roosting, nesting, and feeding ground for waterbirds, including migratory ones. “A mosaic of habitats, including mudflats, ponds, streams, backwaters and thorny scrub are part of Pulicat Sanctuary,” explains Nityanand. These wetlands, he says, are a source of livelihood for fisherfolk, and also help mitigate floods during high tides, cyclones, and heavy rains. He adds, “They are a magical space.” 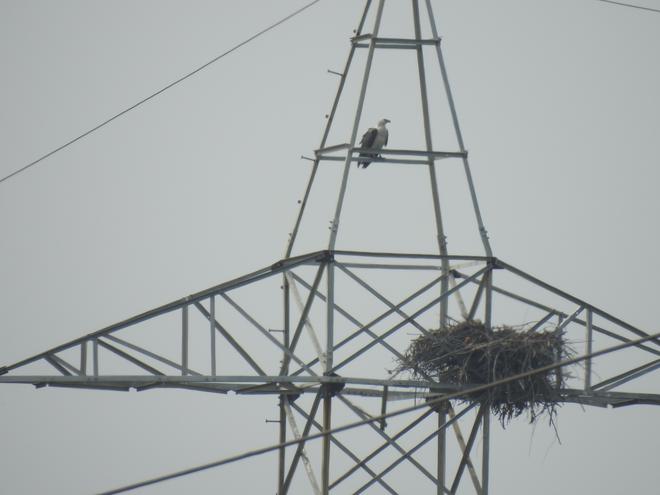 Stating that the pelican nests were found south of Kamarajar Port’s Gate No 2, and the eagle’s nest was spotted opposite North Chennai Thermal Power Station, Nityanand stresses the importance of conservation. “Ten kilometers from the Pulicat Sanctuary’s boundary is the Eco Sensitive Zone (ESZ) within which development should be regulated,” he explains. This buffer zone should help protect the sanctuary, but it is “under threat from industries”, he adds. The Save Ennore Creek campaign has urged the State Government to consider extending Pulicat’s ESZ to cover all areas within the wetlands that are worthy of conservation.

The pelican chicks meanwhile, are flying away one by one from the nest on the tower, which their parents probably took for a babul tree.